So, you may have seen my little write up on StyleScoop on how to create the makeup look from our Siren shoot.

Behind the scenes here!

I am very proud to be a small part of such a dynamic team and I will be posting about 2 “how-to’s” a month showing how you can take current trends or looks from my shoots and use them everyday.

On my blog, I will be doing more in-depth, pro explanations on how I created each look and the products used. 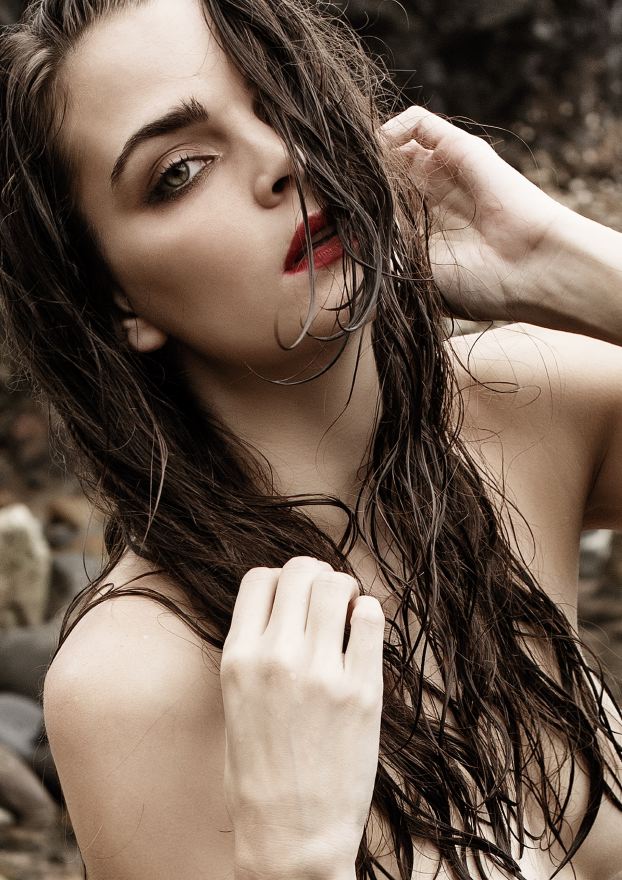 So without further babbling, here is the face chart and full run down of the look I created on Sam: 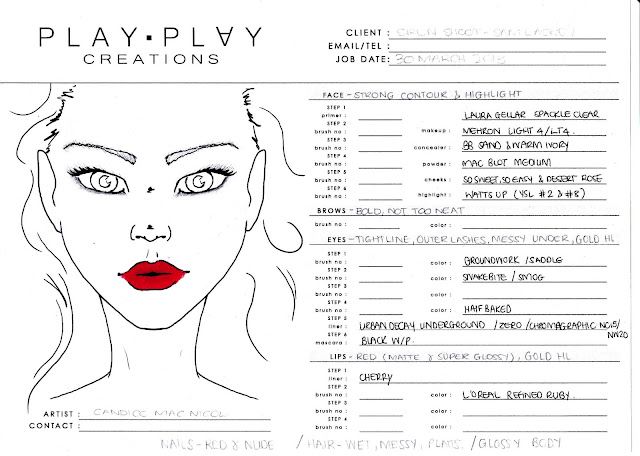 Thanks to Vaughan for creating my custom Playplay Creations face chart.

1. Due to the fact that I was planning on using browns and skin tones to shape the face, I didn’t use colour on the face chart. I used pencil just to judge how the lines and shading would change the shape of the face.

2. I started with skin care prep; cleanse and moisturise. I then used Laura Gellar Spackle to prime the skin.

3. I used Mehron HD Cream Foundation in Light 4 and only in the smallest amount as Sam has near flawless skin. I added a tiny bit of Bobbi Brown concealer in Sand and Warm Ivory under her eyes and at the base of her nose. I also used YSL Touche Eclat #2 and #8 on the inside corners of her eyes, down the centre of her nose and under the arch of her eyebrow to add a subtle highlight. The Mehron foundation doesn’t require much powder as it has a velvety matte finish, but I did use a little MAC Blot powder in Medium on her forehead and the sides of her nose.

4. Before adding blush, I used Benefit Watts Up to highlight from the top of her cheekbones in a C-shape around the temple just to end of her eyebrow. Using a stipling brush, I applied the smallest amount of MAC So sweet, So easy and Desert Rose cream blush to her cheeks and blended it in well.

5. I use MAC Groundwork as a primer for Sam’s eyes, applying a thin layer to her socket and then a slightly thicker, well-blender out layer under the eye. I worked some MAC Saddle into this, focusing the rest of the shadow only under the eye. Using my fave Chanel #14 brush, I applied a thin layer of Urban Decay Snakebite to the outer corner and Urban Decay Smog towards the inner corner. As a highlight to the inner corner, I used Urban Decay Halfbaked, a beautiful rich gold shadow.  I tightlined the top lid with Urban Decay 24/7 liner in Zero and lined the bottom with Urban Decay 24/7 liner in Underground, which is similar to MAC Teddy but waterproof and without the annoying smudging. I used MAC Chromagraphic pencil NC15/NW20 in her waterline to ensure her eyes looked bright and large. I finished her eyes with Maybelline Colossal in waterproof black, after adding three bunches of lashes to the outer corner of each eye.

6. Sam has the most incredible eyebrows and there’s nothing I love more than groomed, full eyebrows! However, for this shoot, I wanted her brows to be bold but not too neat so I used MAC Brow Set in Show Off.

7. I wanted a rich red tone for Sam’s lips and I wanted them to, if not be the focal point, be able to hold their own against her intense eyes, so I highlighted the bow of her top lip and the middle of her bottom lip with Urban Decay Halfbaked eye shadow and then applied MAC lip liner in Cherry. I then added L’Oreal Refined Ruby and matte out her lips with MAC Prep+Prime translucent setting powder.

I’m really happy with the final result and how well the makeup held up throughout the shoot. Even Adele commented on the fact that I only had to touch up the lips (and only once after Sam had had some coffee.)

I was also stoked with how well the look came together and how it worked with the story but still complimented Sam’s vibe.