I’ve planned this menswear shoot for a while and it’s taken so long because it’s been tough to get everyone’s schedules aligned. Vaughan took the photos, Adele styled and Kev took video. Oh by the way, here are the behind the scenes pics!

The concept was a woman in menswear-inspired styling. Kayla (Boss & Models International) was the only model I wanted to do this with and you’ll see why…such strong, androgynous beauty! I wanted to emphasize her strong features while keeping the face clean and sculpted and then finish the look with a strong red lip. Because, I mean, look at those lips!

For Kayla’s hair, I wanted to create a Rockabilly style so I mixed a fishtail braid with a pompadour front.

I didn’t change the hair or makeup throughout the shoot as I wanted the focus to be on the model and the incredible styling. Recently I’ve been trying to focus on art direction to build that portfolio too. I love building the concept and creating the finished product.

So, here is the makeup breakdown of the look: 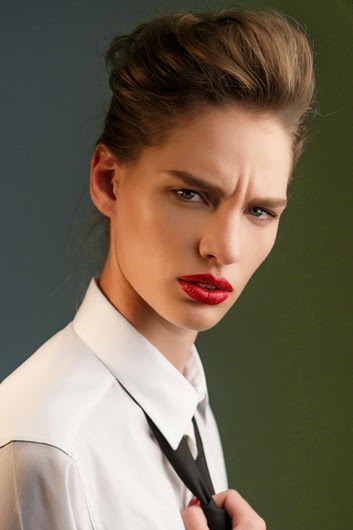 1. Please excuse my lovely face chart…I know some people really get into them but I just use them as a point of reference. Sometimes I don’t even use colour; I just make notes on it….little reminders, if you will.

2. I wanted Kayla’s skin to have a flawless, velvet finish with a strong contrast between the contour and highlights. After treating her skin and applying primer, I used my fave Mehron foundation which is great because it needs little powder in the studio.

3. I contoured using MAC coffee walnut Sculpting cream under her cheekbones, on her temples, along the hairline, down her nose and then along her jawline. I wanted the contour to be strong, but it still needed to be blended out really well. I used Benefit High Beam to highlight on the top of her cheekbones and down the centre of her nose.

4. I enhanced Kayla’s brows using MAC Lingering pencil and then brushed them out with MAC Beguile brow gel.

5. After contouring her eyes with MAC Groundwork, I used the MAC mascara fan brush to apply mascara to her top and bottom lashes. I also used MAC chromagraphic pencil to line her waterline so that her eyes don’t look too small or “closed”.

6. I used pure, clear lanolin to treat Kayla’s lips; I applied it before I started any other makeup and only took it off when I was ready to do her lips. This sticky wax moisturizes and soothes chapped lips and can be found at most pharmacies at a super cheap price. I lined and filled in her lips with MAC Cherry, then applied a highlight to the bow of her lip and the middle of her bottom lip. On top of this, I used OCC lip tar in Vintage – these can be tricky to work with although they offer a great concentration of colour. They do tend to run into fine lines around the lips, hence the lip liner before. On top of this, I used Sephora Fancy Red Ultra Vinyl lip pencil which added a great shine and depth to the colour. Just before we started shooting, I added some Urban Decay Lip Junkie to her lips for a proper glossy finish.

7. It may seem a bit like overkill with all the lip colours and applications but everything has its place: The lipliner is basically a primer or foundation and will hold all the rest in place. The lip tar adds incredible colour with rich undertones, while the lip pencil creates depth to the colour because it is a little lighter and sheer. The gloss adds the final shine. Doing it this way, I was able to make the lips last for pretty much the entire shoot. Nifty, huh? 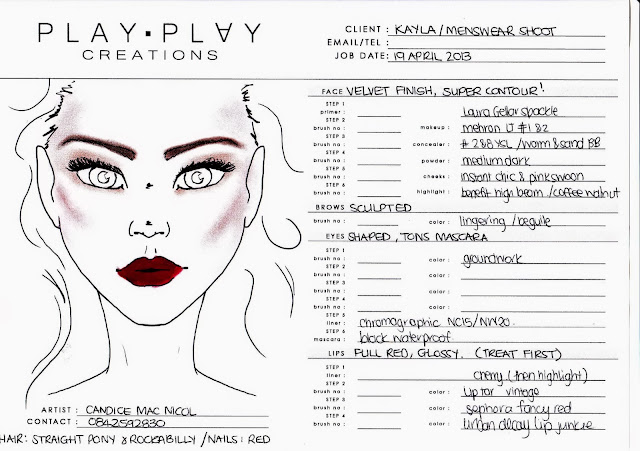 So there it is! I can’t wait to show you the full editorial 🙂

MY WORK, TUTORIAL
prev next